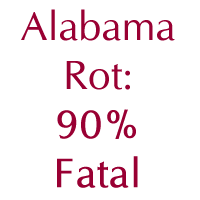 Alabama Rot in dogs is a devastating disease and is fatal in 90% of UK cases.  Regrettably, there are few ‘experts’ in Alabama Rot treatment. Since there have only been 76 reported (confirmed or unconfirmed) cases (at 22/2/15), the vast majority of the 18,000 practising vets in the UK have never treated a dog for Alabama Rot.

Would I first go and see my local vet if I suspected my dog had Alabama Rot? … Yes! However the vet almost certainly will never have seen a case of Alabama Rot before and because the right treatment is required within days (if not hours) I’d insist that my vet got a second opinion and referred my dog that day to Anderson Moores Veterinary Specialists (AMVS) near Winchester in Hampshire –

By December 2014 AMVS had successfully treated seven dogs with Alabama Rot – out of nineteen dogs seen. This 37% success rate is overwhelmingly superior to all other UK vets (personal communication). An 8th dog successfully ‘Treated at Anderson Moores’ (blue circle – see below) was announced 29th January 2015.  Regrettably, AMVS have only seen a quarter of the seventy six reported UK cases.

For a second opinion I’d see Rosanne Jepson of the Royal Veterinary College (RVC) in London.

Rosanne and Shailen Jasani hosted a podcast about Alabama Rot in April 2014 (with Facebook comments).

RVC has treated at least 3 dogs for Alabama Rot.  RVC successfully treated a labrador called Alba walked at Old down Woods in South Gloucestershire (see Unconfirmed Cases – Survived and below). She was treated successfully by RVC with plasmapheresis (listen to the podcast from 25 minutes).

There have been 55 cases of confirmed Alabama Rot in which the dog has died (and had a post mortem); a further 13 cases where Alabama Rot was unconfirmed (without a post mortem) and the dogs died – a total of 68 cases (see my Alabama Rot UK map).  Out of 76 recorded cases only 8 dogs have survived Alabama Rot. That’s a 90%* fatality rate.  This rate could be even greater than this because AMVS stopped publishing some unconfirmed cases of dogs that died of Alabama Rot around March 2014 (personal communication).

At May 2015, all of the Alabama Rot survivors that I know about, either had been referred to Anderson Moores (7 dogs), or to the Royal Veterinary College (1 dog).