Nine confirmed cases (see red paws in map above) of Cutaneous and Renal Glomerular Vasculopathy (CRGV) aka Alabama Rot are in a 45.9km2 (17.7 mile2) area triangle bordered by Ringwood, Bransgore and Brockenhurst. This represents 1 case per 5.9km2 (45.9/9) (1)

In England, there appears to be three Alabama Rot cluster areas – areas with 4 or more confirmed cases of Alabama Rot. The three areas are the New Forest, Greater Manchester and Guildford. In these three areas there have been 26 cases covering an area of 593 km2. (1)

On a case per area basis, confirmed Alabama Rot cases are reported in the ‘Ringwood – Bransgore – Brockenhurst’ cluster triangle 783 times (ie 4622/5.9 case per km2) more frequently than in the rest of England. 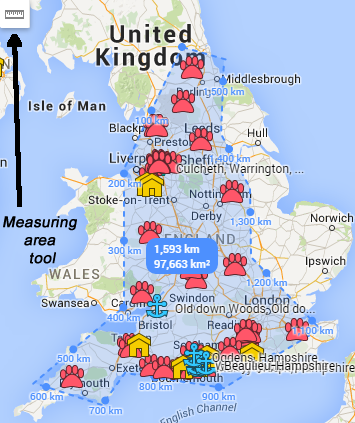 2) It is possible that cases of Alabama Rot are not reported uniformly by vets throughout England – the lead vets, Anderson Moores Veterinary Specialists, are based in Winchester, Hampshire. So vets in New Forest may be reporting a larger proportion of confirmed Alabama Rot cases than elsewhere in UK. A poll of UK vets would establish this.

3) It makes the assumption that clusters do not occur by chance. Further statistical analysis is required.