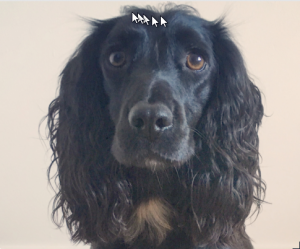 A SWINDON dog owner, Jessica Worthington has revealed the heartbreak of having her pet die from deadly Alabama rot. She took her two cocker spaniels to Marlborough’s West Woods last week. Jessica said: “I shampooed both my dogs after the walk on Friday, as I always would after a walk like that. On Sunday everything was still fine with both dogs but on Monday, literally overnight, lesions started to appear on their legs.”

Jessica Worthington has raised almost £5,250 (in 1 week) for research into Alabama Rot, in memory of Pippa her cocker spaniel. Jessica spoke on Oxford Radio about her loss and her story was picked up by the local press and on South Today on BBC1 on .

Here is Pippa’s story as told to ARRF:

“I loved Pippa from the moment I laid eyes on her, she was a bouncy, cheeky puppy that kept us all on our toes. From the minute she was part of our family Molly our other cocker spaniel took to her straight away and took on the protective big sister role. As Pippa grew older she and Molly grew closer and our family was perfect. The girls came to work with me every day and enjoyed lots of fun walks with all their friends, holidays with us and a life of luxury in our home.

It was the 4th of December 2015 and I decided to take the girls out to West Woods in Marlborough, Wiltshire, as it’s a lovely woodland walk which the girls really enjoy, they had a great time, got really muddy as always and had lots of spaniel fun, After the walk they had to have a bath as they were totally filthy but in their eyes a sign of a fun afternoon. They had a snooze when they got home and all was well. 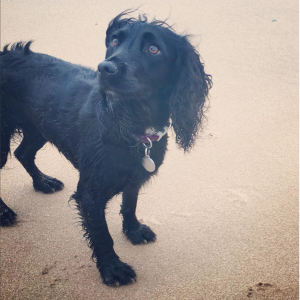 Two days later I noticed that Pippa was a bit stiff so I got her checked by a vet, nothing was found and it was just put down to pulling a muscle. The following morning, I noticed that Pippa was licking her leg, and that’s when I first discovered the lesions, there were 6 in total with reddening of the skin around them. I went to get them checked immediately in a panic and treatment for suspected Alabama Rot was started right away, although at this stage we all hoped that this was not the case. The following day I found Molly licking her paw and to my horror, I discovered that she also had a lesion. She started on the same treatment as Pippa. As I was so worried about Alabama Rot and both of the girl’s lesions looked so typical of the disease they were referred to Anderson Moores Veterinary Specialists the following day.

They continued the treatment there with daily blood testing to check kidney function. For 3 days all was well but on day 4 Pippa’s kidney values started to elevate and her urine output declined so we made the decision to refer her to the Royal Veterinary College for Plasma exchange and dialysis. We felt that these invasive treatments would help give her the best chance of her now grave prognosis. 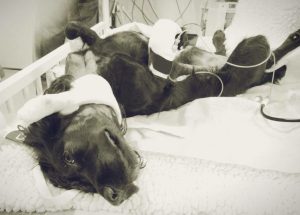 Sadly, after plasma exchange treatment, a plasma transfusion and 2 rounds of dialysis she continued to deteriorate, her liver was now failing as well. She could barely lift her head and we had to let her go. This was like my nightmares coming true.

Pippa was 2 and half years old, full of life and a joy to be around. She was cheated, I felt cheated that she was gone and my heart was broken and will remain broken. The 15th of December will be etched in my mind forever. The day we lost our baby. During Pippa’s stay at the RVC we stayed at a nearby hotel as we wanted to be close by as she was so unstable, but in the end, when we had to say goodbye she was being cuddled by us and she knew how loved she was and still is. During this horrific time, Molly was still at Anderson Moores being blood tested daily and closely monitored. It was about another week before we could take her home. I then had to take her into the local vets for her blood to be tested over Christmas. Her blood parameters remained stable and still are today. We didn’t have a Christmas last year. My heart was too broken and still is.

This has definitely made me question where I walk Molly now. I won’t go to woodland ever again although who knows if this is sensible or not. I have to walk her as much as I always have but there’s always a niggle at the back of my mind that something sinister is lurking. I just hope that the ‘Alabama Rot Research Fund’ charity helps, so no one has to endure this vile disease as my poor girls did.

A few weeks at home living without Pippa urged me to start fundraising to help develop research into this relatively unknown disease. I do not want any other dog owners to feel the heartache that I am living with.”

One Reply to “Jessica Worthington raises £10,000 for Alabama rot research”